Jason and I are back to working on the house.  The intensity of the fourth trimester has let up, the weather is warm and nice, our yard is blooming and we are checking things off our house list (and, I might add, are quite pleased with ourselves).

I was going to wait to devote one post to display all of our work, but I am really excited about a DIY project we worked on and completed this weekend.

May I present to you my new hall light.  Or chandelier.  Or nautical-inspired glass dome of bursting, hexagonal light.  Or whatever you want to call it. 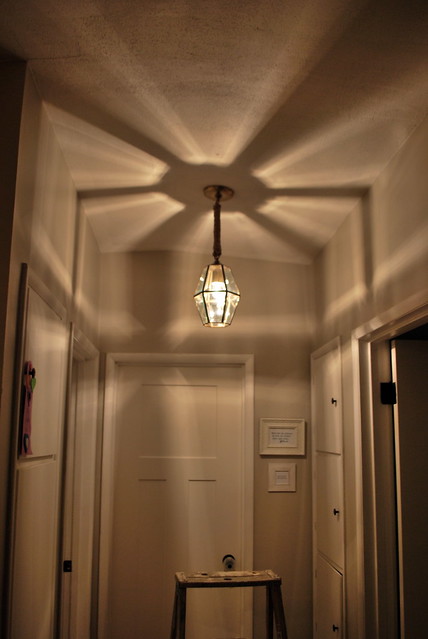 It’s pretty cool, I think.  Here’s what it looks like close up. 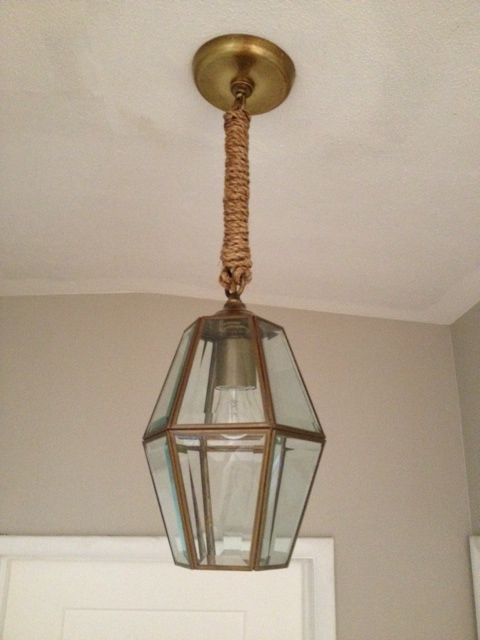 I had no idea that it would look so cool lit up, I was excited just by the idea and finished product hanging there in the daylight.

The lamp itself was a find from Goodwill for $6 and originally served as an exterior light over a front door.  It came with a chain link strand, which I knew right away I was going to get rid of to snazz it up a bit (this is where husband comes into the picture).

Jason confirmed to me that the idea I had in mind was probably do-able, so we brought it home and he started thinking about how to make it all happen.  We needed to put together some sort of set-up to put the electrical wire through that I could also fix the rope to.

First, he bought PVC pipe and cut it to our desired length.  Then he drilled holes through at the top and bottom. He used stainless steel eye straps which he bent and put into the pipe, threaded with screws.

Hopefully the pictures below will help make sense of that description.

The top of the pipe, side view. 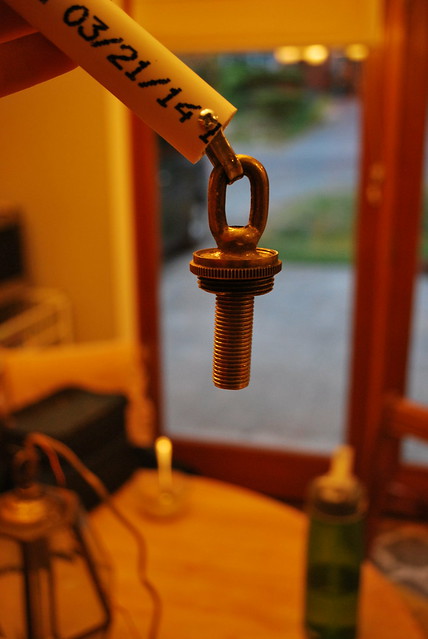 More of the top attachment. 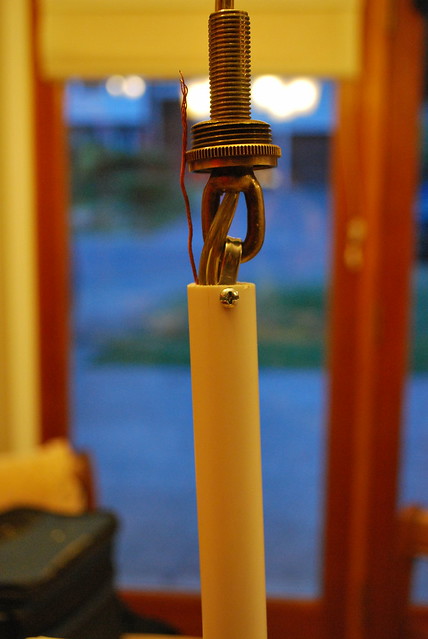 The bottom of the pipe, where it attaches to the light. 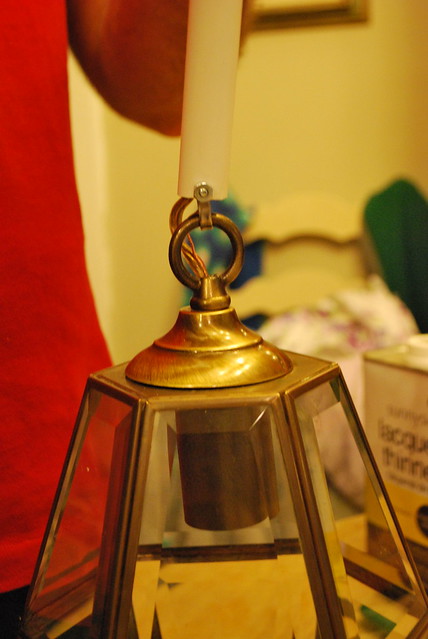 Threading the wires through. 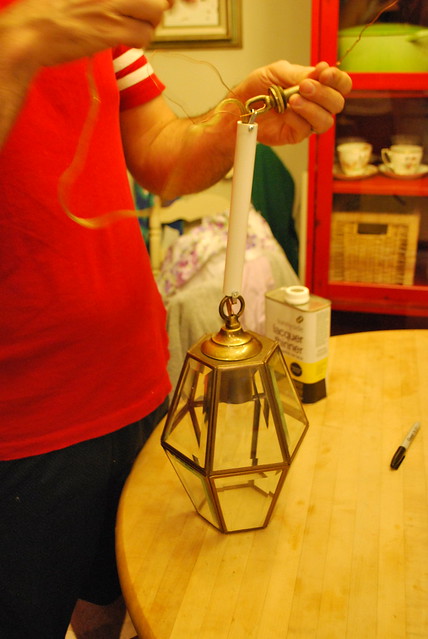 At this point we started messing with the rope we bought, trying to figure out how we (I) wanted it to look wrapped around the PVC pipe.  It ended up looking too fat attached to the lamp.  Jason was annoyed and my dreams of a fun, happy fight-free DIY couples project started to fizzle.

Apparently he felt stronger about the aesthetics of this project than I had realized (this is typically unheard of).  He really liked the particular type of rope we bought (as did I) and he didn’t want to use something thinner, which I thought would look better.  Eventually I went back to Home Depot and found smaller copper pipe to replace the PVC.  This way we could keep the rope.

Once Jason had drilled and configured the new copper pipe, put the wire through and added the existing top and bottom hardware, we hot-glued the rope to the pipe.  The only hard thing was, as I mentioned, figuring out how we wanted the rope to look.  Thankfully, we were in agreement about this, so the gluing process was easy.

Then Jason slapped some ceiling paint on to cover up the gross brown spot that the old light left, and did whatever electrical stuff needed to be done to hang the light and make it shine.  And then, voila!

We finished the project at about 11pm, but it even shoots out those rays in the daytime, too.  Usually I am fastidious about turning off lights when we’re not using them, but I like to leave this one on for the wow factor.

For the sake of me showing off one more time, here’s a before and after. 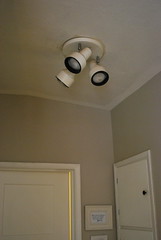 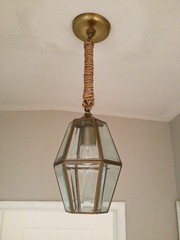 Our lamp, at the steep price of probably about $25 total.

My obsession with lighting continues.  I’ve decided to sell the chandelier that hangs in our stairwell and probably the ceiling fan/light in our bedroom and come up with some lighting we can make ourselves.  If it works out and isn’t ugly,  I will be sure to share the results.