First, let me start with this.

THAT is the epitome of a Haggard kids’ summer trip to Grandma T’s. It’s their version of magical, and it’s called the WAVE CRASHER. My mom says it’s the best 40 bucks she spends on our kids each year (not surprisingly, it needs to replaced regularly).

This is what the trio did over and over and over again while we were at Cave B. They were probably also eating lots of sugar and watching TV and living the good life. When I say “good life” I  mean themed goody bags, because that’s how Grandma rolls. (Who’s ever turned down a really good goody bag? NO ONE).

When Jason and I reunited with the kids, I noticed I felt refreshed and ready to parent, and in particular to co-parent with Jason. I had a different tone with our kids, and I had the energy to work on “seeing” each one of them. I noticed Jason doing this, too.

My heart felt like it was saying, “Ahhh, this is what it’s supposed to be like. I’ve missed this!” The “this” isn’t that everyone behaves and gets along, but that we are living life together, investing in and seeking to know one another, not just get by. Kids thrive on that. Heck, everyone thrives on that! Like I’ve mentioned, my soul didn’t realize how hungry for connection it really was.

For the next few days we savored 4th of July weekend in small town Coeur d’Alene.

First, we visited the new carousel (which is actually really old and has a cool story), had a picnic in the park, and caught a live show at the bandshell.

Lots of older people were sitting out in their folding lawn chairs listening to the music of their era (50s and 60s). Imogen and Beatrice jumped right in with the few that were dancing and made some new friends. 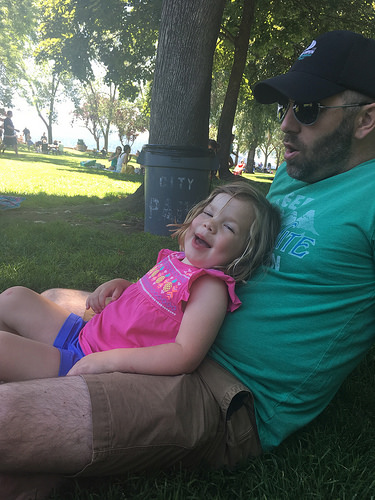 Next stop was Joy’s pool. We do this every summer visit, and Joy is so gracious every time when we show up, get wet and make lots of noise.

It was so great to have Jason with us this time.

Ian probably burned 6,000 calories in the pool that day. I spent a lot of time watching my back, as he’d sneak up on me from underwater; I reciprocated. We had a lot of fun.

It wasn’t fifteen minutes of pool time and Imogen was confidently jumping off the diving board. 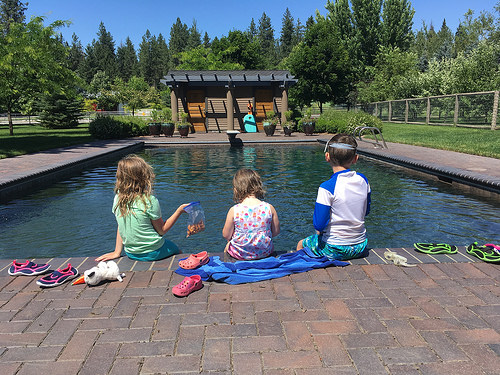 Joy’s pool is a beautiful color; it feels like dipping into a lake bath, not a chlorinated pool. Horses from her stables graze nearby and a few cats and dogs meander around. Ian gets to pick apples from the orchard (pictured to the right of the pool house). It’s magical.

Next up was the actual 4th celebrations. This will be our second year of hitting the downtown parade, and we have our usual spot, which is both close to the start of the parade and a short walk to the local ice cream joint. Both factors are important in having a pleasant parade experience.

Grandma is really into holiday outfits, and for some reason every year we end up with at least two 4th of July outfits for each child, if not more. I can’t fit enough time into the season to them wear them all. As you can see they also received accessories this year. 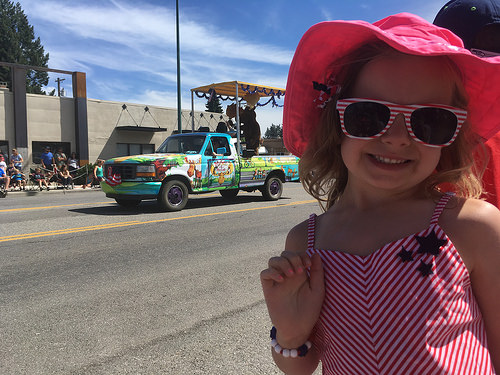 Imogen got a photo with Mudgie the Moose–he’s a famous character in that neck of the woods. Jason made a point of cheering for my high school’s rival cheerleading squad, just to annoy me. But he also bought me iced coffee, which helped the situation.

That evening we had burgers, as much corn on the cob as we could eat, and banana splits. Well, Ian ate a banana split since he’s the only one who will eat fruit. We let him go to town, as you can see. There are rewards for having a well-rounded diet.

Since we were avoiding the crowds, big fireworks, and late night, we picked up a few little sparkly things from the fireworks stand. Ian was proud of himself that he got to light up the “big” ones and Beatrice took hold of a sparkler for the first time. 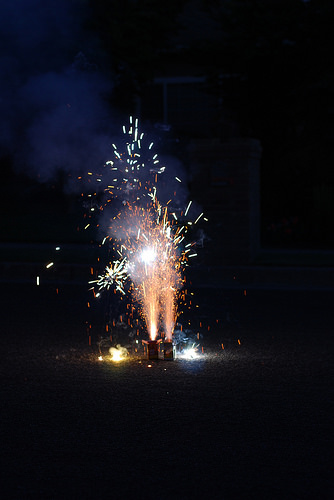 The neighbors were probably hugely impressed by our display, and happy our show only lasted about 20 minutes and was over at 8:30pm. 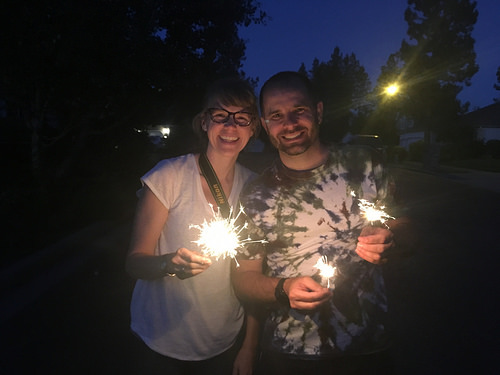 I don’t have pictures, but Jason and I also got the chance to do some more bike riding. Since the Ironman came to Coeur d’Alene about ten years ago, the city has created and connected so many paved bike trails, so you can ride out in the country, by the lake, in the mountains. It’s amazing . . . and magical.

Second leg of our family vacation complete! Next up is road trippin’ it across Montana to Great Falls for a visit with cousins.

This entry was posted in Travels & Adventure. Bookmark the permalink.

One response to “Summer vacation, 4th of July”