I took this photo of Ian back in November, at his seventh birthday party.  I call it “The force is strong with this one.” 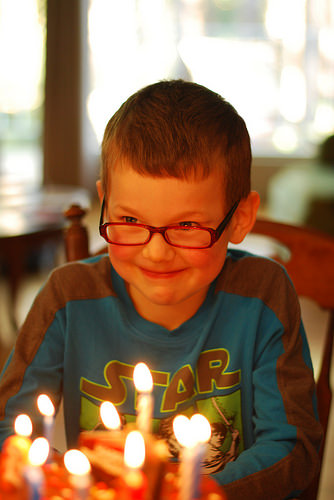 I love this guy so much.

Now here’s a haphazard compilation of my favorite moments/comments/observations from Ian’s seventh year.

Ian killed it at Halloween this year. He was truly the best Luke Skywalker from Return of the Jedi EVER. I thought it was a bit strange that he insisted he be this version of Luke, which is not common (Pinterest does not give a lot of ideas for six-year-olds who want to be the dark, brooding and intense Luke who almost goes evil). But being the amazing, creative mom that I am, we were able to totally get it together.  He looked awesome! And if you know him, you know Luke in black is a good fit for his personality.

A few months ago I asked Imogen to sit in Ian’s seat in the van, as we had to rearrange for some reason.  She flipped out and said, “I don’t want to sit back there, it SMELLS SO BAD!!!” I assumed this was just her being weird (she does have an incredibly acute sense of smell and eres on the dramatic side).  The whole ride she kept complaining about how gross it was and that Ian’s “stuff” was back there.

Later, as I was cleaning the van out I realized her wailing was totally legitimate. In and around Ian’s seat were molding apple cores, stale popcorn, trash of various sorts and ages, and a water bottle that was probably nasty inside (I didn’t look or smell for verification). It was like a teenage boy’s bedroom. I will not ask Imogen to sit back there again, and I really should apologize to her for being so dismissive of her concerns.

I can only imagine what Ian’s teenage bedroom will look like. Note to self: If Imogen ever gets into deep, deep trouble as an adolescent use “cleaning Ian’s bedroom” as a consequence.

I love how Ian’s glasses are too wide for his face and they constantly slip down on his nose.  When he looks up from Legos or a book he peers over his glasses like an old man. And when he’s annoyed or mad, it’s even funnier. I know this is probably terrible for his eyesight, but it’s so amusing I’m not going to do anything about it right now. Plus, I don’t want to pay to go the optometrist.

Speaking of glasses, I think we are on Ian’s third pair this year. Zenni keeps our previous orders on file, so all I do is click “purchase” and a new pair of his trademark red and black specs comes in the mail a week later.

I love how I have to bug Ian to get up off the library floor and get his books checked out so we can go. And I love how he reads all the way home, and then stays in the van long after everyone else has gone inside, immersed in some Star Wars book.

If you look closely you can see Ian reading under a book light. This was the first time requested to read in bed. I was thrilled!

Speaking of books, Ian is obsessed with the Lego Star Wars Visual Dictionary (“Updated and Expanded!” he would say) he received from Vavu and Vava for his birthday. I can’t get the kid to put it down or get it out of my way. Every day he’s telling me “Did you know that in 2011 they made a Republic Frigade, a Battle Nabu Starfighter and Vulture Droid? And in 2012 they made the best set ever–the X-Wing Starfighter!,” No, Ian, I didn’t know that. But now I know. And we can eat dinner. Or do school. Or you can go pick up. Or you can go somewhere else and read that stinkin’ book.

[Side note: As creative research for this post I just asked Ian which Lego Star Wars sets were made in 2011 and 2012 and he listed them all of for me by memory. He’s actually not reading the Star Wars Visual Dictionary at this moment, but this is only because he got a fresh stack of books from the library. He also just read this post and pointed out that “Nabu” is actually spelled “Naboo.” I wouldn’t want to get that wrong.]

On the Legos subject, Ian is absolutely, hands down, the best Master Builder I have ever met. And I’m not just saying of the seven-year-old kind. He comes up with incredible stuff. He will select a new set partially based on what pieces come with it so he can create something else he’s already been thinking about. 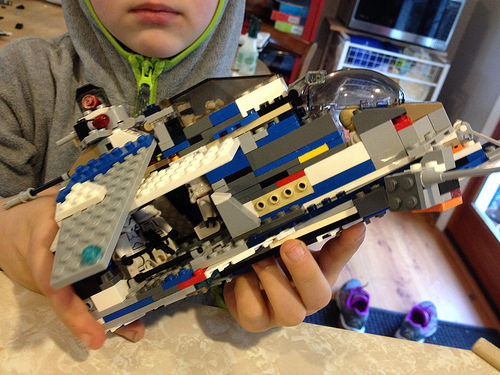 Here’s the display he created for the HEE’s Expo event: 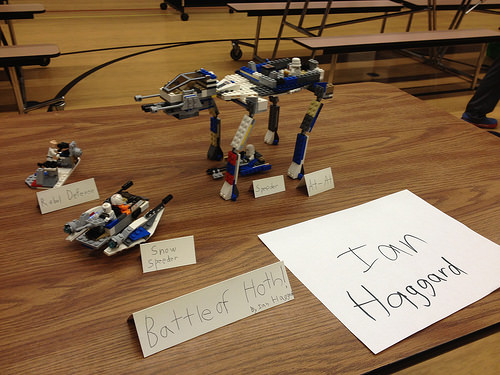 Ian spent a good portion of his seventh year in this coat. For some reason once he puts it on, he doesn’t take it off, regardless of whether he’s in or outside. And he keeps the hood up a lot of the time.

After it’s second season in use, that coat is really getting too small, which makes him look even more comical. 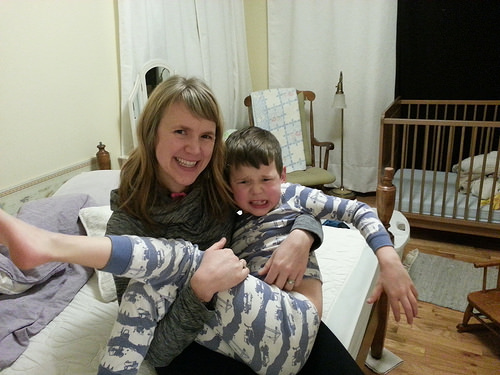 Every once in a while Ian asks me to snuggle, usually before bed time. It’s like wrangling a giant, large-footed baby who has every muscle flexed. But I still love it. I call him carpet head because man, that kid has got some thick hair!

The other day Ian said, in front of both his sisters, “I love Imogen and I love Bebo, but I love Bebo a bit more.” I waited to see if Imogen was offended and she didn’t seem to notice, so I think I just changed the subject.  Then yesterday Ian gave Imogen a big chunk of his chocolate bunny and said, “I’m giving this to you because you’re the best sister ever.” Imogen responded with, “Well, it was mine anyway since I gave it to you as a gift.” I suppose this is a good example of the rise and fall of their affections for one another (and what a typical day of their living and playing together looks like).

This year has been wonderful as far as chores are concerned. Ian rarely ever whines about emptying the dishwasher, folding his clothes, or picking up. I LOVE IT. He’s not jumping up and down to help out, but I appreciate his logic; if he gets the work done he has more time to play and do what he wants. Fine by me.

What he does whine (and yell) about is doing school.  He’s a great student and he’s super smart. Once he gets to work and applies himself I think he feels encouraged and enjoys learning. But almost every week day I say, “Okay, we’re going to start school now” and he flips out. Like backtalk, sassy, yelling, awful-face reaction. It’s like I’m looking at my angriest self in the mirror. 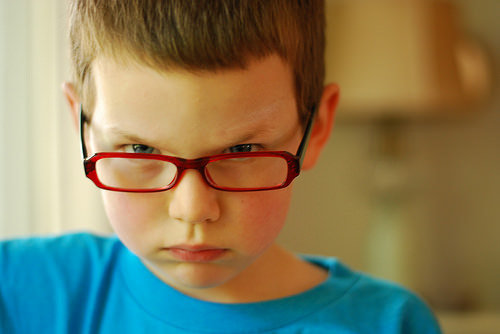 One day was particularly bad and so his journal entry topic was selected for him: to apologize to his mom and explain how he thinks it made her feel when he yelled at her. He begrudgingly went about his work, but less than ten minutes later he approached me with this: 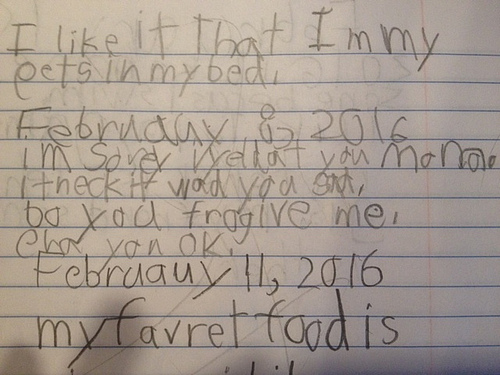 In case you have trouble reading this, I will translate. It says, “I’m sorry I yelled at you Mom. I think it made you sad. Do you forgive me? Are you ok?”

I asked him to read it to me and when he got to the end he choked up. And then he got made because somehow he’s learned that being tender and vulnerable is not a good thing (maybe from me? just a thought . . .) Anyway, I snagged a hug and told him I loved him before he ran off.

Ian has become an even better gift giver than he was last year.  His Christmas gifts for others were so perfect.

I can’t help but comment that Jason looks like a crazed lunatic in this pic.  And there’s Ian’s old-man glasses! 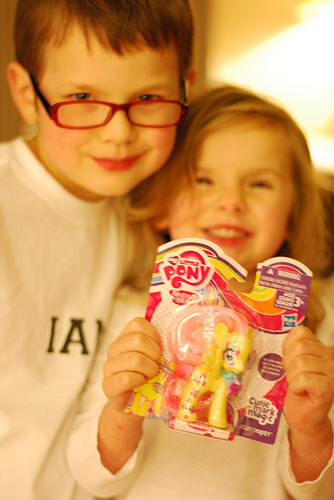 And lastly, Bebo with the lamby Ian got her with his Awana bucks.

I think I may have mentioned before that we sponsor a seven-year-old boy from Haiti named Gregory through Compassion International. We do this, in part, so Ian can connect with another child his age who lives somewhere vastly different, and who needs God’s love in some very specific ways.

Ian has participated over the last few years in writing letters, drawing pictures, and sending little gifts to Gregory. But a month ago we received a letter that Gregory’s father had died. Because his mom died several years ago, he is now a complete orphan. When I told Ian he got overwhelmed and started to cry. Then he pulled himself together and ran off with a sense of resolve. He grabbed all of his saving and giving money and wanted to give it to Gregory so he “can be happy again.”

Ian sending his letter off to Gregory.

We called Compassion that day and made a special donation, and Ian and I prayed with the customer service rep on the phone. I asked Ian, “Are there any bible verses that you think would encourage Gregory right now?” He shrugged at first, but then decided on Psalm 23, since he had just memorized it. So I wrote it out on a piece of paper and Ian colored on it. The Compassion rep confirmed with me that it will be translated so Gregory can read it himself. 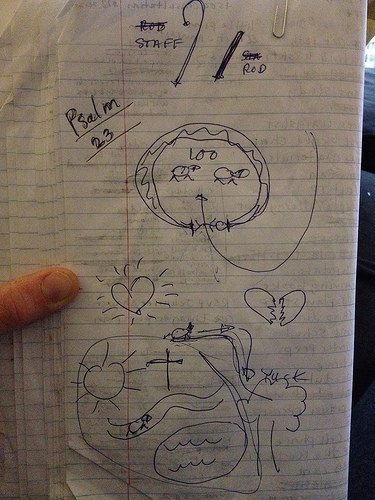 Speaking of Psalm 23, here is how I haphazardly tried to explain it to Ian when he was memorizing it several months ago. It was a fun conversation. Having to explain life in simple terms is really good for my soul, and I hope it’s good for him, too.

It’s been a smattering of things, and I wish I had some heartfelt, God-inspired words directly for Ian this year, but I don’t. I’ll just say I’m so very happy to be his mom and to have shared another year with him.

I love you, Ian bo bee-an. Here’s some more great pics of you this last year. You’re still pretty cute, even though you’re so old now.

(In chronological order, starting with Ian’s 6th birthday and ending with his 7th.) 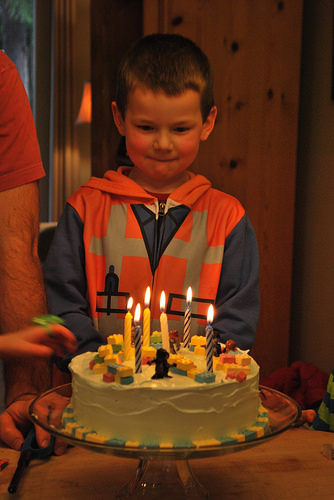 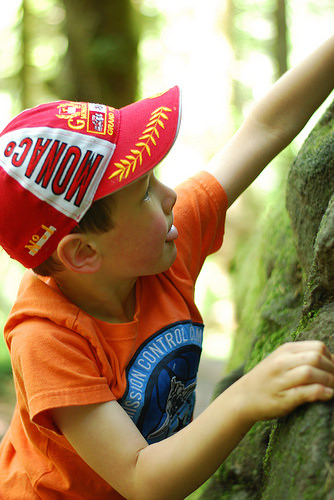 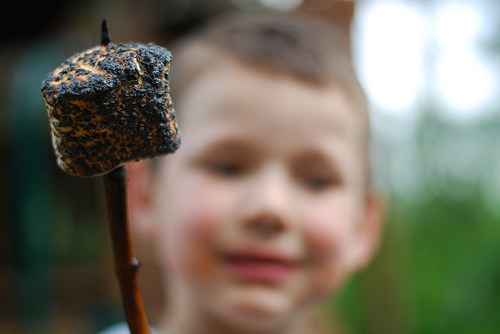 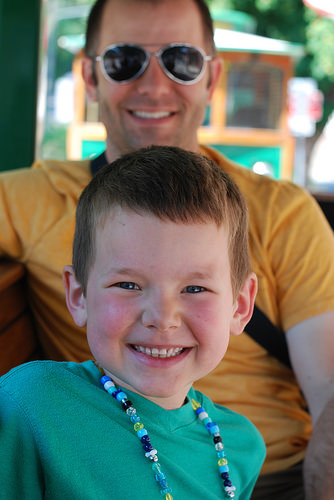 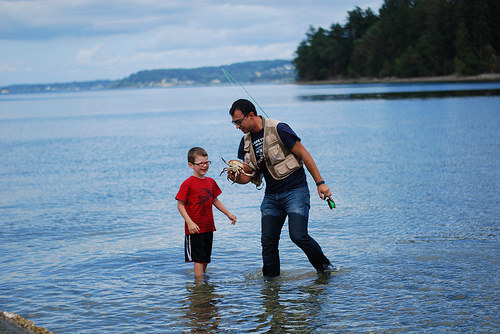 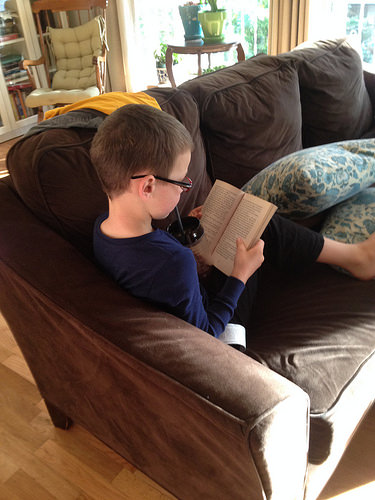 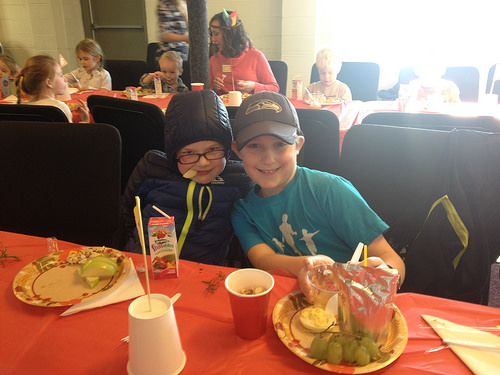 This entry was posted in Ian, Uncategorized. Bookmark the permalink.